Think you have acid reflux? You may not. Plus—the latest on treating chronic heartburn.

Millions of Americans take over-the-counter medications for acid reflux. The problem is many don’t have acid reflux. 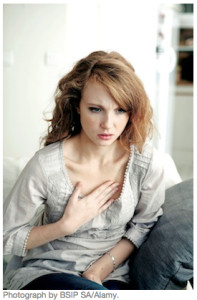 According to Caren Palese, a gastroenterologist in DC, more than half of the patients who are referred to her with acid-reflux symptoms that haven’t improved with proton-pump inhibitors such as Prilosec and Nexium—which reduce acid production—don’t have the condition at all.

Acid reflux occurs when stomach contents flow back into the esophagus, causing heartburn, coughing, trouble swallowing, chest and throat pain, and the feeling of a lump in your throat, says Dr. Palese, director of the Center for Gastrointestinal Motility and Heartburn at MedStar Georgetown.

According to the National Institutes of Health, 20 percent of adult Americans experience reflux symptoms weekly. Persistent reflux, also known as gastroesophageal reflux disease, or GERD, can lead to inflammation, ulceration, and cellular changes in the esophagus, increasing the risk of esophageal cancer.

People who don’t have acid reflux but share many of the symptoms of those with GERD may actually have non-acid reflux. Determining which type a patient suffers from can require tests, such as esophageal pH monitoring. Knowing the kind of reflux someone has is key to coming up with an effective treatment, ranging from medication to surgery.

When symptoms persist, doctors look for an underlying cause, such as a weak lower esophageal sphincter (a ring of muscle that acts as the gatekeeper between the stomach and esophagus) or a hiatal hernia.

In rare cases, when anatomical abnormalities are present and medication and lifestyle changes—such as eating smaller meals and not lying down within two to three hours of eating—fail, surgery may be an option. One surgery, fundoplication, involves wrapping the top of the stomach around the esophagus. The procedure is usually effective and can be performed with minimally invasive surgery, says gastroenterologist Marie Borum, a professor at George Washington University School of Medicine & Health Sciences. The downside is that fundoplication may have to be repeated as tissue shifts with time, weakening the lower esophageal sphincter.

Another operation, recently approved but not yet widely used, involves placing a ring of magnetic titanium beads around the lower esophageal sphincter. The beads’ magnetic force is strong enough to keep the sphincter closed and reflux at bay but is weak enough to allow the sphincter to open when a patient eats. Like fundoplication, the device can be implanted using minimally invasive surgery.

“I don’t want to tell people to run out and get surgery if we can get good medication control, because there can be complications,” says Dr. Borum. “But there are now surgeries that can be done laparoscopically, which have helped people who may have been reluctant to undergo open surgery.”

Robin Tricoles (tricoles@comcast.net) currently writes about science for the National Institutes of Health.

This article appears in the January 2015 issue of Washingtonian.