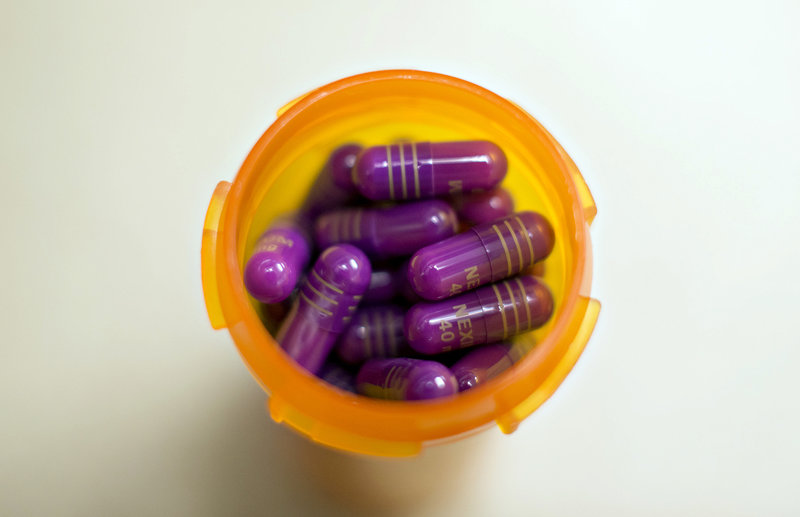 Nexium is one of several popular medications for heartburn and acid reflux called proton-pump inhibitors.
Daniel Acker/Bloomberg via Getty Images

The drugs, known as proton-pump inhibitors (PPIs), appear to significantly elevate the chances of developing chronic kidney disease, according to a study involving more than 250,000 people.

An estimated 15 million Americans use PPIs, which are sold by prescription and over-the-counter under a variety of brand names, including Nexium, Prilosec and Prevacid.

“They’re very, very common medications,” says Morgan Grams, an epidemiologist at the Johns Hopkins Bloomberg School of Health who led the research, being published in the journal JAMA Internal Medicine.

When PPIs were first approved in the 1980s, the drugs appeared to be very safe. Since then, concerns have been rising about their safety. Evidence has emerged that the drugs may increase the risk for a variety of problems, including bone fractures,infections and possibly even heart problems.

Grams and her colleagues decided to examine whether PPIs might increase the risk forchronic kidney disease. They examined the medical records of two groups of people: 10,482 participants in the Artherosclerosis Risk in Communities (ARIC) study and 248,751 patients in the Geisinger Health System in Pennsylvania.

Among the 322 people using PPIs in the ARIC study, the 10-year estimated absolute risk for chronic kidney disease was 11.8 percent, the researchers reported. The expected risk would have been 8.5 percent. The 10-year absolute risk among the 16,900 patients using PPIs in the Geisinger Health System was 15.6 percent, whereas 13.9 percent would have been expected to develop chronic kidney disease.

Grams said it isn’t possible from these data to determine who is at highest risk of developing kidney disease. The study looked only at whether someone had gotten a prescription for a PPI and did not look at how long someone may have been on the drug.

Grams also stressed that her study does not prove that the drugs can cause chronic kidney disease. More research is needed to explore the association she found, she says.

But the findings are worrying enough that people should use PPIs only when they really need them, she says.

“Given the fact that so many people use PPI medications, I think it is judicious to exercise some caution,” she says.

“I think it’s a pretty big concern,” says Adam Schoenfeld, an internal medicine resident at the University of California, San Francisco, who co-authored an editorialaccompanying the study.

Schoenfeld noted that other research has found that many prescriptions for PPIs are inappropriate.

“When they first came out they weren’t associated with side effects, or we didn’t think they were,” Schoenfeld says. “So we put [people] on this medication thinking: ‘It’s a quick fix and they’re very safe.’ But in actuality they’re associated with a range of side effects.”

Schoenfeld says people should try other measures first to alleviate heartburn and indigestion. For example, people often feel better if they change their diet, stop smoking or reduce their alcohol consumption, he says.

“There’s other ways that people can feel better with indigestion or heartburn. They can change their diet,” he says.

Shots queried several companies that sell PPIs, including AstraZeneca, which markets Nexium. In an email to Shots, Alicia Dunn, a spokesperson for AstraZeneca, wrote:

“Patient safety is an important priority for AstraZeneca and we believe all of our PPI medicines … are generally safe and effective when used in accordance with the label.”

She added: “We encourage patients to work with their health care provider to determine the most appropriate treatment approach based on their individual needs.”

To view the original article and any updates, please click here